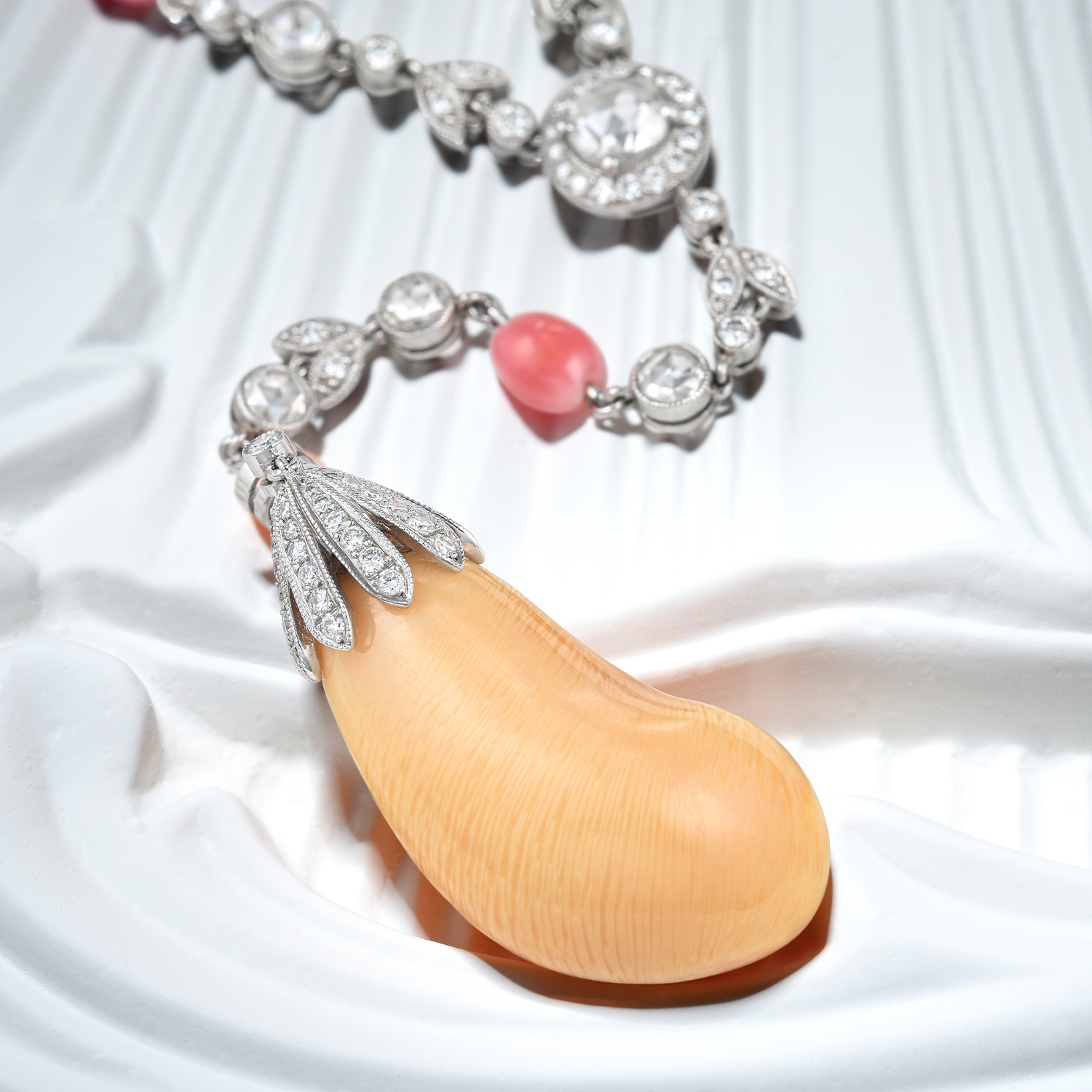 Often referred to as the “Queen of Gems,” pearls possess a history and allure far beyond what today’s wearer may recognize. Long before the cultivation of pearls was discovered, a natural pearl necklace comprised of well-matched spheres was a treasure of almost incomparable value, reserved almost exclusively for the noble, rich, and powerful.

Unlike gemstones that are mined from the earth, a living organism actually produces a pearl. A pearl is formed when an irritant, such as parasite, sand or a piece of shell, becomes accidentally lodged in an oyster’s soft inner cavity—similar to our own unfortunate experiences with splinters. As a natural physiological response, oysters coat that irritant to protect itself with a crystalline fluid composed of calcium carbonate called “nacre.” Over time, nacre builds up around the irritant in layers until a pearl is formed.

The term “pearl” generally refers to nacreous creations found in oysters, but there are also non-nacreous gems created in other mollusks that fall under this category. These include incredibly rare, oval-shaped conch pearls and yellowish-orange Melo pearls. In this article, we will be elaborating on the non-nacreous Melo pearl, which is formed in a similar fashion as the oyster pearl, but are composed of mainly calcite.

Melo pearls come from the Melo melo gastropod from the Volutidae family, also known as the Indian volute or the bailer shell. This large sea snail has a limited range, occupying shallow seas and populates the South China Sea. They can also be found near Myanmar, Malaysia, Thailand, Vietnam, Indonesia and the Philippines.

Since Melo pearls are non-nacreous, they do not have the familiar iridescent shine of white pearls. However, the Melo pearl has a porcelaneous luster that makes it very attractive. Occurring in a range of colors, the most prized is the intense orange hue similar to a ripe papaya. These pearls exhibit silky flame-like stripes, and the most valuable Melo pearls are those with excellent flame structure.

How Rare are Melo Pearls?

The probability of finding an orange Melo pearl is one in several thousand shells, and they occur in a variety of shapes, ranging from irregular baroque to oval and egg-shaped. Although generally rounded, nearly perfect spheres are extremely rare and especially coveted. While most pearls are measured in millimeters according to their size, Melo pearls, like diamonds, are measured in carats. They are also harder than traditional pearls at 5 Mohs.

Oysters and mussels can be cultured or farmed to create pearls, however, the Melo pearl has not yet been successfully cultured. This means that every Melo pearl found is natural, grown in the wild through the creature’s own devices—making Melo pearls all the more desirable and rare.