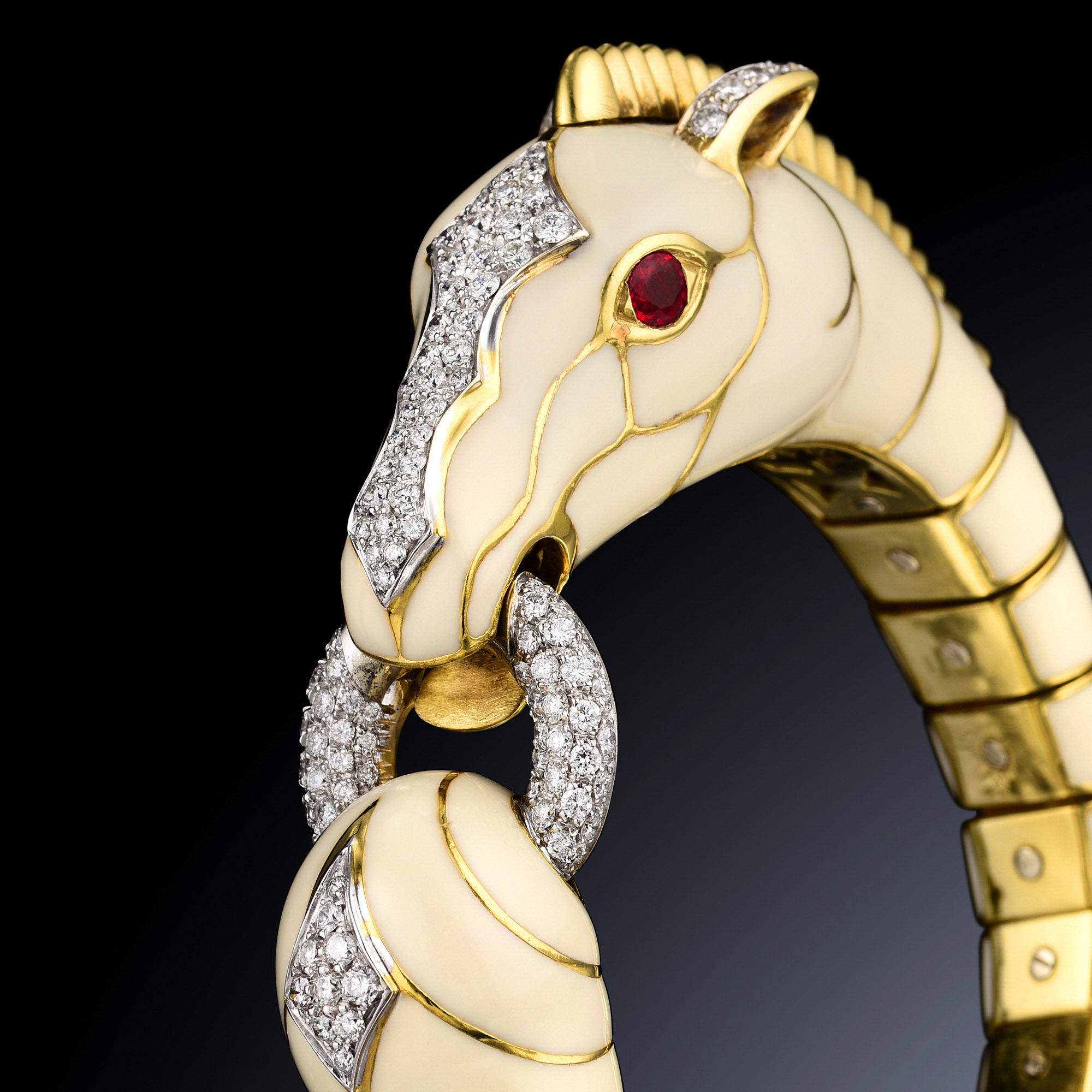 A maker who stands unequaled in his bold use of colored enamel and love of animal motifs, David Webb’s creations offer a playful escape from the everyday.

In 1945, the North Carolina native opened, what remains today, one of the most successful American jewelry houses of the century. His strikingly imaginative designs filled with eye-catching geometric elements and remarkable use of color quickly became the favorite amongst celebrities and fashion aficionados alike. Amongst his elite clientele are celebrities like Ava Gardner, Elizabeth Taylor, Diana Vreeland, as well as Princess Grace Kelly of Monaco and the Duchess of Windsor. 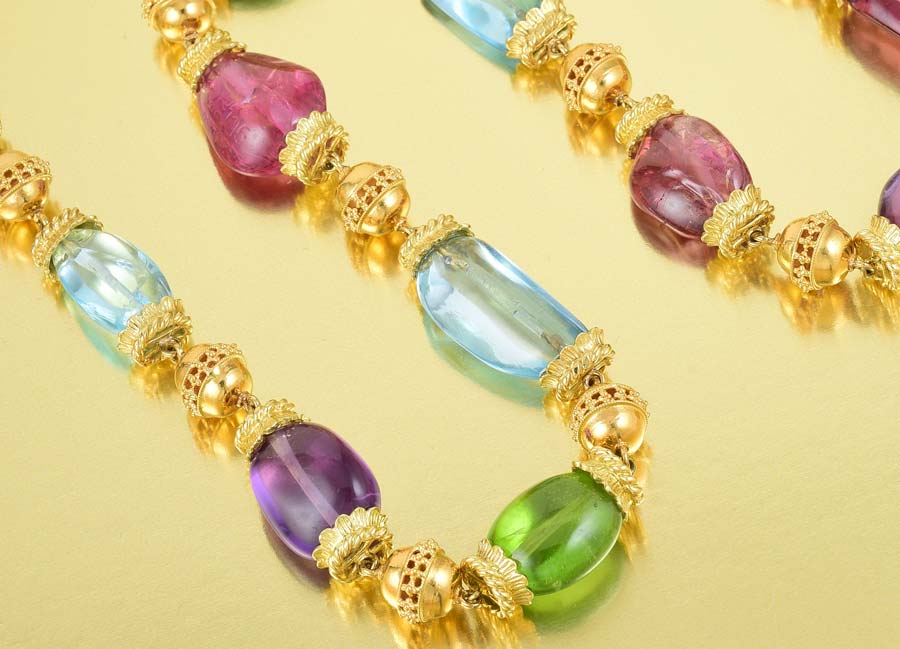 A skilled jeweler as well as an innovative designer, Webb often worked closely with the production of his pieces.  With extreme attention to detail and devotion to the quality of his work, Webb’s creations form a unique marriage of fashion and luxury. The designer’s signature style, often contrasting enamel and both precious and semi-precious gemstones, remains unmistakable. 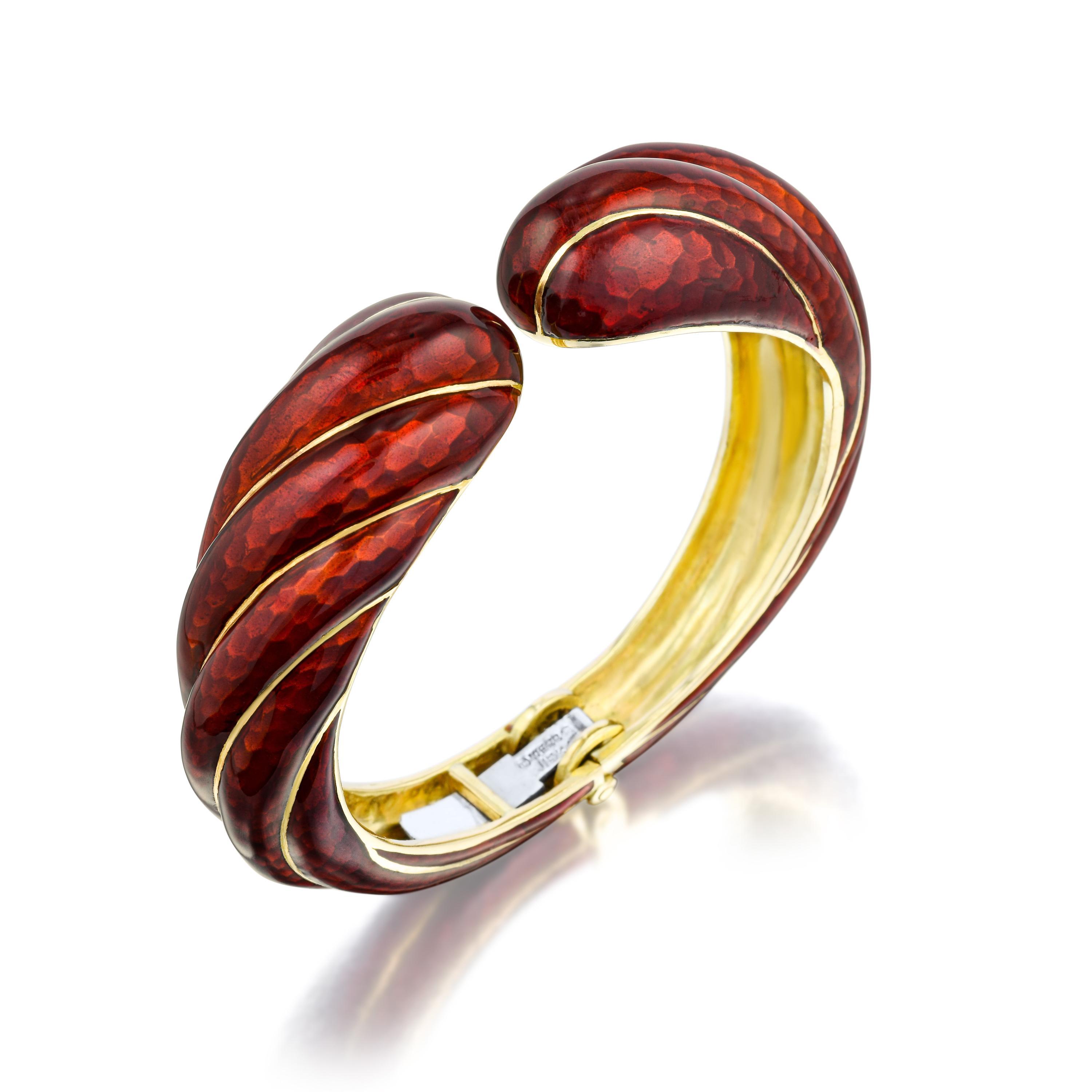 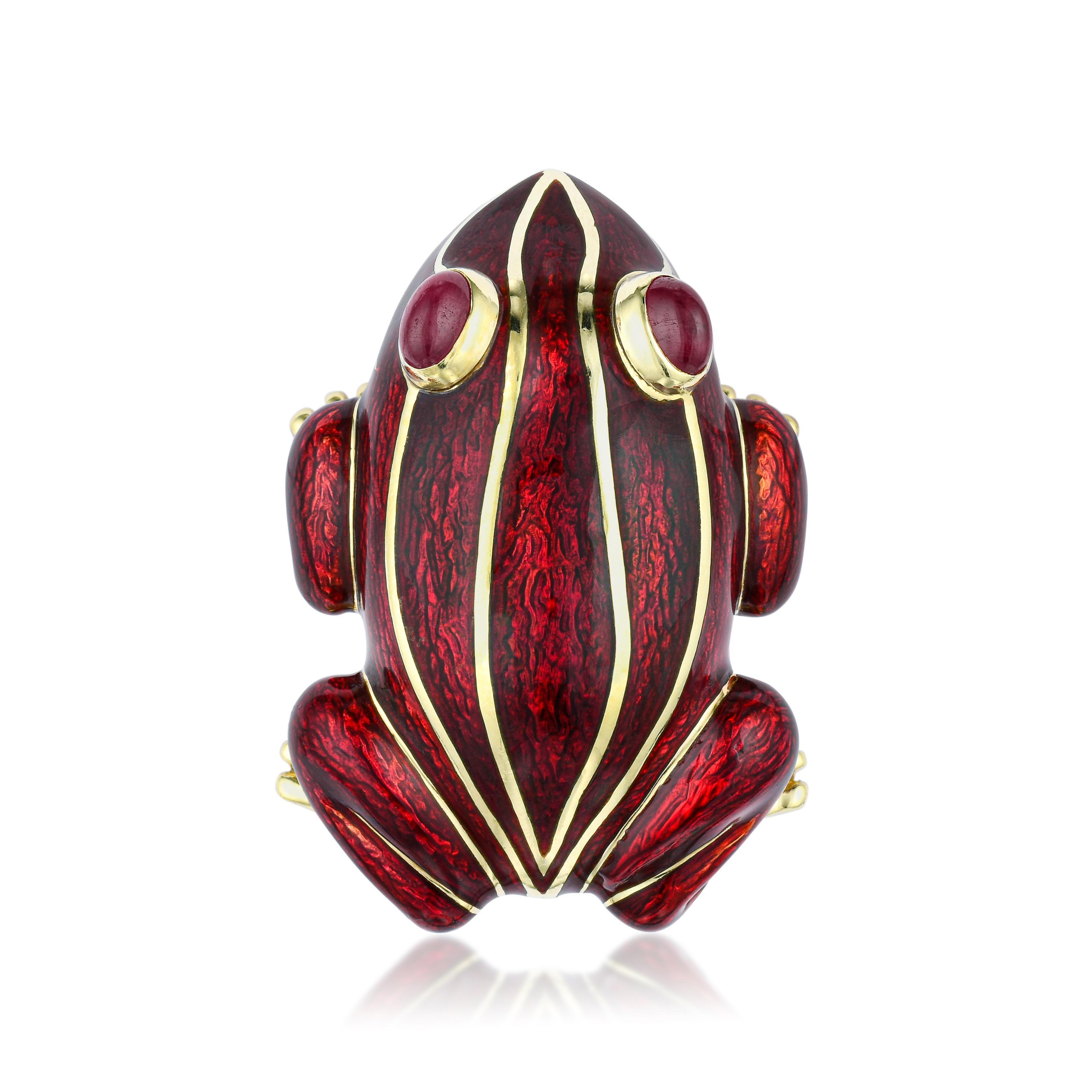 Webb was fond of using enamel to add color to his designs. Enamel is a decorative coating applied to a metal; and in Webb’s case, his metal of choice was usually yellow gold. The contrast of bright yellow gold with his enamel detailing creates a bold look that is quintessential Webb—as seen in a couple of FORTUNA’s David Webb offerings: a whimsical Ruby and Enamel Frog Brooch which pairs beautifully with the bold Enamel Bangle.

Perhaps the jewelry that Webb is most known for are his wide-ranging collection of animal bracelets, brooches and pins. Animals are common in jewelry everywhere, but nobody does animals like David Webb; the first of David Webb’s animal pieces was a bracelet he designed in 1957. By 1963 the jewelry house had designed enough imaginative animal motifs to form an animal kingdom of their own.

A History of David Webb

Among the many iconic craftsmen that paved the way for modern jewelry as we know it, David Webb stands out as a true original. His one-of-a-kind eye for design and detail rose to fame amid the glamor of the 1960s, yet his history begins decades earlier with his birth in 1925. Born and raised in Asheville, North Carolina, Webb’s love for fine metal began with an early apprenticeship in a silversmith’s shop.

This passion was fueled by an early move to New York, where he repaired jewelry in Greenwich Village. Webb soon rose in the ranks of popularity amid New York’s social elite, quickly creating a name for himself. This reputation for excellence enabled him to open his own shop and establish David Webb Inc. in 1948.

Webb’s unique approach to jewelry making was shaped by a rich understanding of the work of classic jewelers from around the globe, spanning from ancient Greece to China. He incorporated design elements borrowed throughout the ages, adding modern twists to create pieces that can only be described as timeless.

His incorporation of animal themes — inspired by his favorite pets — was lauded by the biggest stars from coast to coast. David Webb drew deep inspiration from the world around him, from history and architecture to the human spirit — an inspiration that’s visible in every piece he crafted.

By 1975, David Webb’s company had produced a variety of winning collections, spanning in style from stunning diamond bracelets to totem pieces and hand-painted enamel jewelry pieces. His standout success earned David Webb several features on the most reputed fashion magazines of his time.

Tragically, his legendary career was cut short when he passed away from pancreatic cancer at the age of 50. David Webb Inc. has continued to carry out his legacy with a selection of jewels that embody the same spirit, creativity and boldness that set Webb’s original pieces apart.

An Inside Look Into David Webb’s Iconic Pieces

Bold. Flagrant. Unforgettable. David Webb’s rich and varied career saw the production of countless unmistakably distinctive pieces of jewelry. Several of his collections have stood the test of time and become truly iconic over the years. His animal-themed jewels were particularly popular among some of his most reputed clientele, finding their way to decorate the hands and throats of the world’s greatest leaders.

Find Your Favorites at FORTUNA®

Interested in discovering a collection of David Webb’s fine jewelry for yourself? FORTUNA’s upcoming auction is your opportunity to admire the unique aesthetic of this legendary American jeweler. From intricate diamond and blue enamel pendants to signature animal-themed jewelry, our collection provides a rare chance to own your own piece or sell yours at auction.

Contact FORTUNA today for a valuation and visit our upcoming auctions page to learn more.