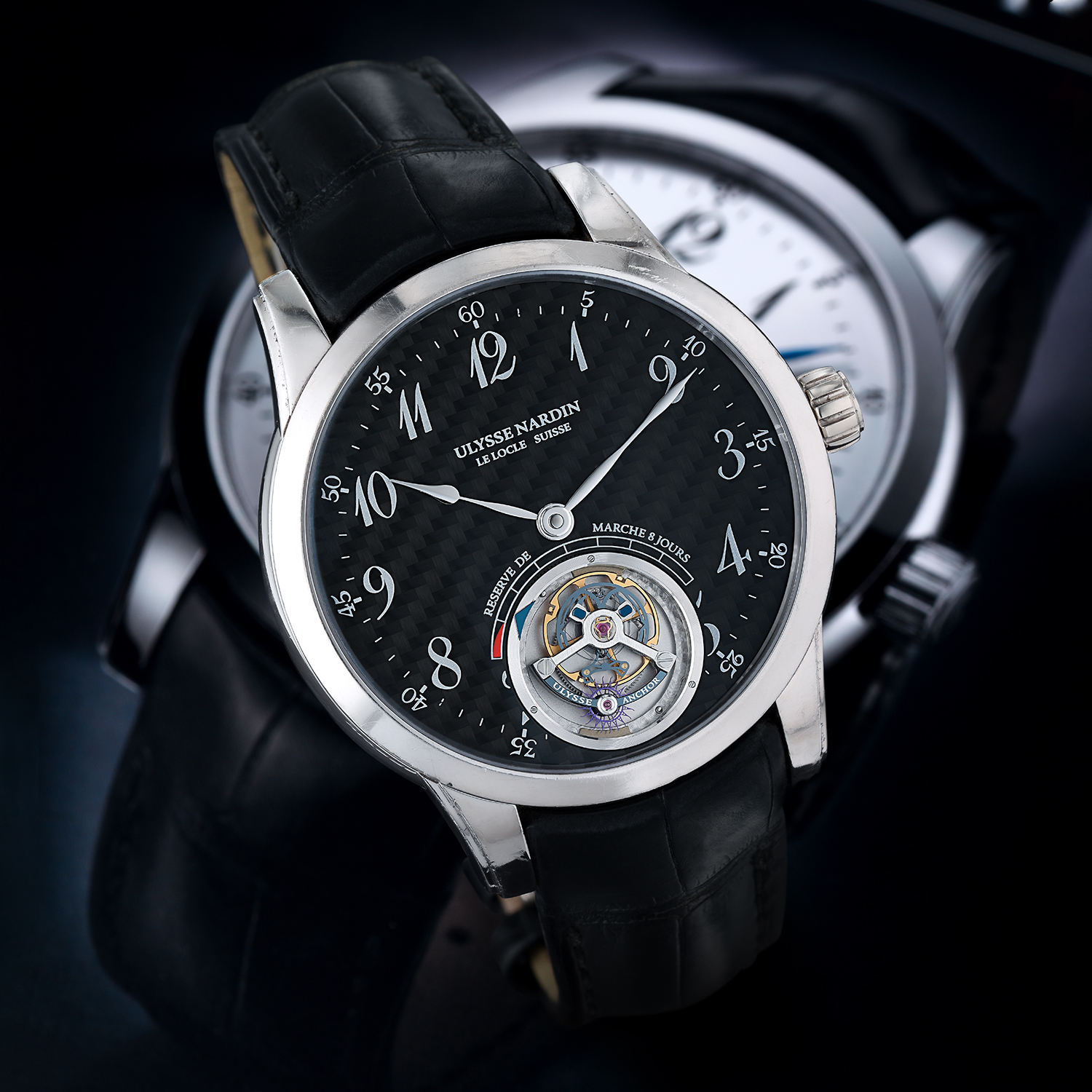 Fortuna is excited to bring to auction a rare timepiece and marvel of horological innovation: the Ulysse Nardin Anchor Tourbillon Limited Carbon Dial in 18K White Gold. Conceived as a series of traditionally styled watches equipped with Ulysse Nardin’s proprietary mechanical movement and Anchor escapement, the timepiece is complete with an impressive tourbillon and 8-day power reserve, as well as unmatched craftsmanship and years of research behind the ingenious use of silicon in the movement. The carbon fiber dial adds a lot of depth and is nicely contrasted by the silver printing. The 44mm case also guarantees a handsomely grand presence on any wrist.

The real marvel behind the Ulysse Nardin Anchor Tourbillon watch is the Anchor escapement, a marriage of the best of watchmaking past with the technology of the future. Made by dedicated watchmakers and nanofabrication engineers alike, the Anchor escapement consists mostly of silicon parts, an unconventional material in the world of luxury watch making, but its resistance to magnetism and ability to be manufactured to a level of accuracy only possible with nanotechnology makes it the ideal material for horologists.

Ulysse Nardin pioneered the use of silicon technology in the escapement of its mechanical watches, drastically improving the regulation system of how a mechanical watch transfers energy in equal doses from the mainspring barrel onto the balance wheel. Silicon is extremely durable, yet surprisingly lightweight, and its replacement of metal and jeweled parts in the escapement creates a very low friction environment, resulting in better precision and time keeping accuracy of the watch. Unlike standard metal movements, silicon parts also do not require lubrication or constant maintenance. Furthermore, one of the biggest advantages of silicon is how technology can be utilized to manufacture pieces to extreme precision. The Anchor escapement incorporates silicon blades with the thickness of 15 micrometers, roughly one-tenth the thickness of a human hair, owed entirely to the silicon micro-machining technology of DRIE (Deep Reactive Ion Etching). After 7 years of research and development by Ulysse Nardin in achieving this new anchor escapement, you can rest assured that you are investing in a watch meant to last lifetimes.

Originally debuted in 2015, there are only eight versions of the Ulysse Nardin Anchor Tourbillon, featuring a variety of dials and case metals. Each model was released in extremely limited batches, with only 18 pieces ever created for each version. The present example is #13 of its 18 piece batch, with an 18K white gold case and carbon fiber dial, and originally retailed for $89,000. This luxury timepiece comes in classical design, housing innovative technology at the 6 o’clock hour marker, with the Tourbillon clearly visible. The Flying Tourbillon has no upper bridge to block your view, so you can be constantly mesmerized by the intricate mechanics which spin on its own axis for 60 seconds at a time. We hope the lucky buyer enjoys this horological tour de force for years to come.