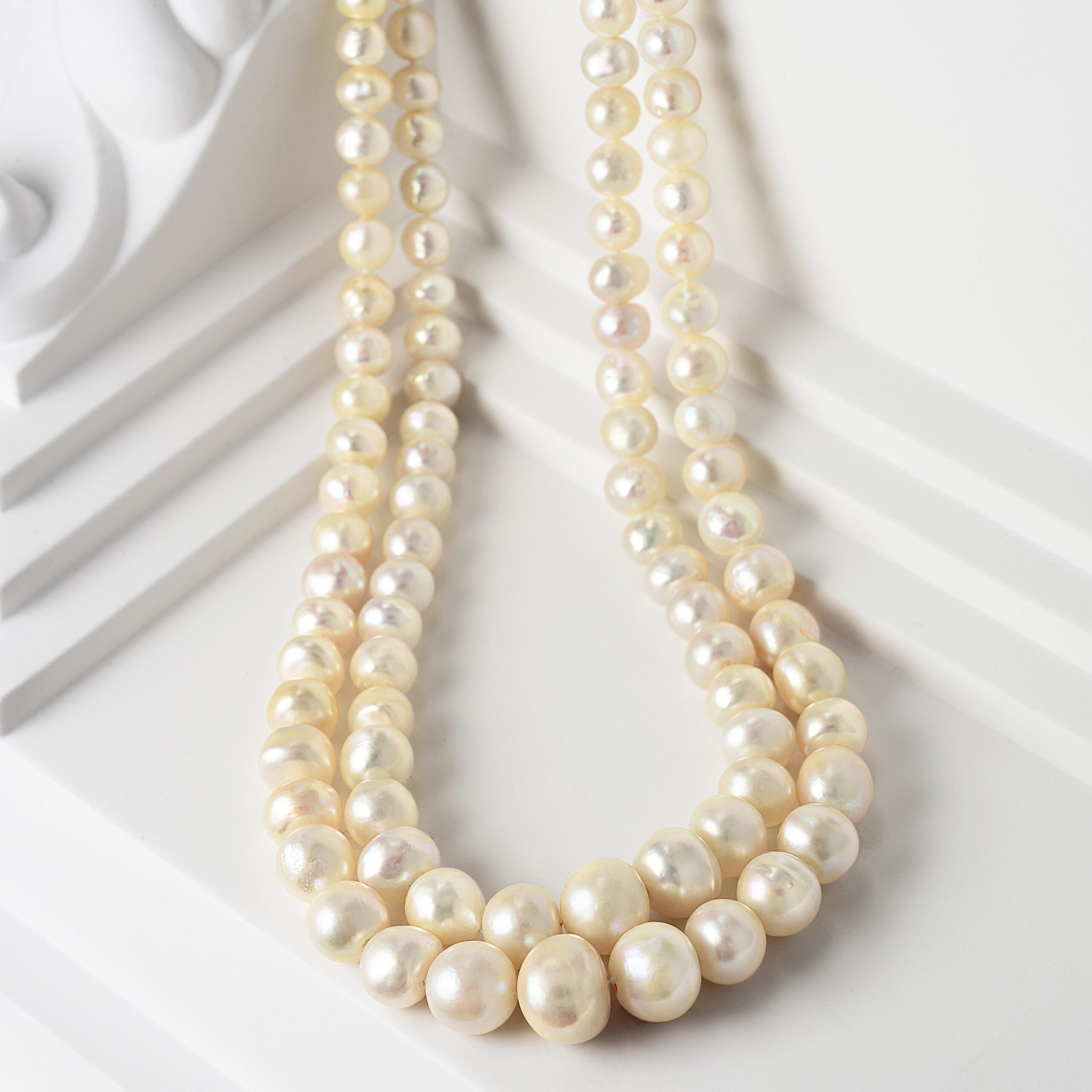 The Beauty of Pearls

Fortuna is excited to give you a closer look into the deep history of pearls and share some of our highest selling pearl lots.

In honor of June’s birthstone, we are excited to share the cultural importance of pearls and dive deep into the origins of this natural treasure. The beautiful underwater gem is found in mollusks and clams and is the only precious stone to come from a living creature. Their association with bodies of water makes them an apt choice for a summertime birthstone; however, pearls have held significance throughout jewelry history, long before birthstone months existed. In Persian mythology, pearls were thought to be the “tears of the gods,” while ancient Chinese legend held that the moon used powers to create pearls in order to mirror the moon’s celestial glow and mystery.

What augments the allure of pearls even further is the infinitesimal chance of them existing naturally. Pearls occur in nature by the presence of an irritant within the mollusk or oyster, which may be a parasite or even a single grain of sand that has made its way into the shell. The mollusk produces a coating layer called “nacre.” It takes many months, even years, for the oyster to produce a pearl. The acquisition of natural pearls requires long dives into the ocean’s depths, most of which prove to be fruitless. Only 1 in about 10,000 wild oysters will yield a pearl, and even fewer will produce a pearl of gem quality.

As such, contemporary jewelers have almost entirely relied on the cultured pearl industry to source pearls. Pearl culturing is when pearl farmers inject an irritant into mollusks for the specific purpose of producing pearls. This method does away with the need for long and dangerous dives in search of the pearls.

It would be a huge disservice to discuss pearls and fail to mention Cartier and arguably the most famous example of pearl jewelry. While Cartier is renowned worldwide for its long history of jewelry excellence, a large part of their legacy is owed to pearls. You may be running through a list of iconic Cartier pieces in your mind: the Love Bracelet, the Panthère d’Cartier, etc. But if you think bigger, you’ll picture the famous Fifth Avenue Cartier mansion, a New York landmark. Remarkably, the impetus behind Cartier’s monumental acquisition of this iconic structure can be attributed to two strands of pearls.

In 1909, Pierre Cartier arrived to New York in an exciting attempt to bring Cartier to the forefront of the American market. He set up a small office on 5th Avenue to sell his brother’s creations. It wasn’t until Maisie Plant set her eyes on a Cartier double strand pearl necklace that the French jeweler had the opportunity for such a magnificent piece of real estate. Maisie was the young wife of a very wealthy and eager-to-please man, Morton F. Plant, the heir to the Plant railroad and steamship empire, and she desperately wanted the coveted necklace. Mr. Plant agreed to exchange his Renaissance-style mansion on the corner of 5th Avenue and 52nd Street for what was widely believed to be the most expensive pearl necklace in the world, composed of two strands of enormous natural South Sea pearls, one consisting of 55 pearls; and the other, 73 perfect pearls—estimated to be over $20 million in today’s dollars. Even for a jeweler of such prestige, it was no easy feat for Cartier to acquire such a necklace. With the exchange, the old 5-story townhouse was converted into the New York Headquarters for Cartier, and remains so today.

This Cartier Art Deco Natural Pearl Diamond and Rock Crystal Platinum Bracelet was crafted in the same era as Maisie’s beloved necklace. The Art Deco era saw a combination of seemingly clashing materials resulting in wonderful designs. Cartier created beautiful contrast by juxtaposing the geometric rock crystal accent with six rows of round natural cream-colored saltwater pearls. The delicate, fluid pearl strands make a bold statement when combined with the rock crystal and diamond accents. This incredible piece of history and artistry was estimated to sell at auction for between $50,000 – $70,000. However, the power of the pearl seems to hold true, for after a starting bid of $30,000 the piece ended up achieving $140,625 at Fortuna’s Fine Jewels auction in June 2018.

The French design house of René Boivin was known to create some of the most original and modern sculptural pieces of the time, setting themselves apart from the typical aesthetic that characterized jewelry of the 1930s and 1940s. The collectability of René Boivin jewelry continues to grow over time, as demonstrated by this particular piece which achieved $22,500 at auction.
Exquisitely crafted in platinum with an 18K white gold tongue, strung with perfectly matched cultured pearls, featuring a magnificent clasp with a large old European-cut diamond accented by deep green emeralds, we can only imagine how many heads turn as a result of this piece walking into a room.

Much like Maisie’s coveted necklace, this next high achieving pearl lot features a double strand of graduated natural saltwater pearls. This necklace, exuding timeless elegance and class, had a modest estimate of estimate of $20,000 – $30,000 in our April 2018 Important Jewels sale. With a starting bid of $12,500, this necklace eventually achieved an impressive $143,750 at auction, proving pearls still reign supreme.

A timeless classic, this fine, single strand of graduated South Sea pearls is completed by an 18K white gold clasp set with round brilliant-cut diamonds weighing a total of approximately 0.98 carats. The kind of necklace handed down for generations made its way into our auction with a starting bid of $12,000 and achieved $22,500 at auction. While the pearl necklace appears effortlessly elegant, it was no easy feat to find such well-matched pearls for this piece. Whoever has the outdated notion that pearls are frumpy and the accessory of old women, think again. Pearls are as prominent now as ever before, being worn by everyone from the Queen of England to Scarlett Johansson. In fact, recent years have seen the adornment being worn by notable male figures as well, including Harry Styles, Shawn Mendes, the Jonas Brothers, and A$AP Rocky—promising for the demand of these pieces to grow alongside their new market.

Pearls have a natural association with water. However, another stone not naturally found in the depths of the ocean has also come to be associated with the mighty expanse of the sea; aquamarine bore its name from its deep blue hue resembling the sea. This 50.00-Carat Aquamarine, Diamond and Pearl Necklace was offered by Fortuna for an original $13,000 and went on to achieve  $24,400 at auction.
Featuring a modified brilliant-cut aquamarine, weighing approximately 50.00 carats, accented with old European-cut and transitional-cut diamonds, hung from a seed pearl necklace, this necklace like many antique jewels can be worn in multiple ways, with the detachable pendant doubling as a clip-on brooch.

Though known as the King of Diamonds, Harry Winston is no stranger to pearls. In fact, the 2019 Harry Winston New York city collection was led by a Pearl and Diamond draperies earrings and necklace suite, proving once more that pearls remain as quintessential to New York style as the day Audrey Hepburn put on her multi-strand pearl necklace and gazed into the windows of Tiffany & Co. as Holly Golightly. This particular set of earrings is set with white cultured pearls with rose overtones and a high luster. The June birthstone is accented by marquise-cut diamonds of approximately 3.6 carats total and are set to create the shape of a flower or sun. These striking earrings were offered for $8,000 and achieved $13,750 at auction.

Get a Free Valuation at Fortuna Auction

At Fortuna Auction, we want to be a resource for all who wish to learn more about watches and jewelry—replete with stylistic periods, history of craftsmanship and designers—as well as how to understand the real market value of different types of collectible jewelry and watches.

You can consult our jewelry experts for free, unbiased valuations, with no obligation to sell. And if you do decide to sell at auction, our team will market your item to millions of competing bidders located in more than 50 countries. If you’re interested in buying or selling at one of Fortuna’s upcoming auctions, feel free to contact our office today.