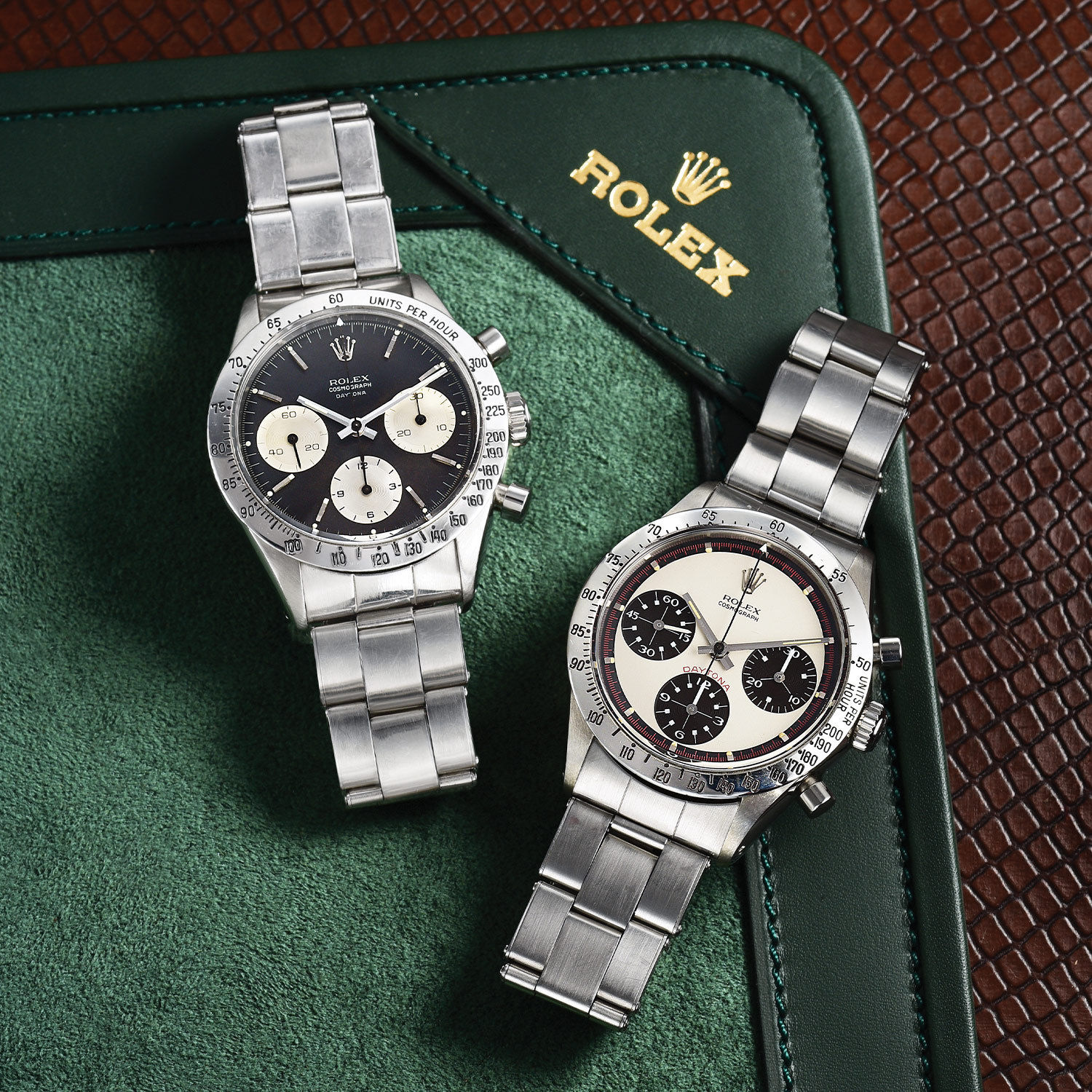 Our Favorite Daytona Dials & What Makes Them So Special

The dial of a Rolex dramatically changes the aesthetic of the timepiece and is what really gives the watch character. Over time, Rolex Daytona watches have featured a number of unique dials that have become important for collectors.

Starting in 1970, Daytona references 6263 and 6265 were introduced, featuring large screw-down pushers that gave the watch a much more heavy-duty and larger appearance. These two references possessed a myriad of dial variations, with some dials that completely omitted the “Daytona” moniker. Of the dials that did include the “Daytona” text, the bright red serif fonts appear just above the middle sub-register in two font sizes: large or small. The Daytona “Big Red” and “Small Red” are both highly prized by collectors and comes in silver or black dials with contrasting sub-dials. Click here for more information on an example offered this April at auction!

Take a look at some examples of “Big Red” Daytona’s that Fortuna has offered at auction. The “Daytona” text extends well beyond the two hour markers on either side of the “12” in the sub-register. The text on “Small Red” Daytona’s do not extend as widely as the “Big Reds.”

In general, the circa 1988 Daytona reference 16520 is rare, with the early bezel graduated to 200 units per hour—prior to Rolex increasing the bezel to 400 units per hour to keep up with the faster drivers of the period. This Daytona followed the end of the porcelain dial automatic Daytona.

The “Four-Line” Daytona Ref. 16520—also referred to as the “Mark 2” dial—is an early run in which Rolex may have been testing fewer words on this dial than previous designs, so the watch reads “Superlative Chronometer” with “Officially Certified” noticeably missing. The ref. 16520 also features an upside-down “6” in the center sub-register, resembling a nine more than a six. This is considered a small design flaw which actually makes the piece more valuable to collectors.

Daytona’s with the “Paul Newman” dial don’t look like a Rolex watch at first glance. Singer was actually the manufacturer of this dial before Rolex made its components in-house. Originally called exotic dials, the designs feature large Art Deco numerals and used 15-30-45-60 markers in the seconds sub-dial, instead of the more typical 20-40-60. These dials also have square markers in the subsidiary registers and a bright red minute track surrounding the dial, making the watch look “funkier” compared to the minimalist dials found on the typical Daytona of the time. Click here for more information on a “Paul Newman” Daytona coming up for auction this April!

Though not initially popular, these dials received a second life once they were popularized by Paul Newman. Their extreme rarity also contributes to their significant rise in value over their years. In fact, Paul Newman’s own “Paul Newman” Daytona Ref. 6239 broke auction records when the wristwatch sold in 2017 for $17.8 million. The model is still commonly known today as the “Paul Newman” and is worth roughly 4-5 times more than the standard Ref. 6239, without the “Paul Newman” dial.

This version of the Daytona Ref. 16520 was nicknamed after Osvaldo Patrizzi, a watch auctioneer who first appreciated and spoke about the unique color-change on this dial of the Rolex Daytona, in which the silver sub-dials achieve an attractive brown color over time.

What makes the Patrizzi Dial unique is that roughly between 1994 and 1995, Rolex used Zapon varnish to protect the face of the black dials. The varnish proved to not offer adequate protection, and the effects of UV and oxidation turned the silver dials brown. The watches gain a deeper shade with time, and no two watches have aged the same way, so color variations make each piece unique.

Today, collectors especially prize this earlier version of the Ref. 16520, especially since Rolex made very few of them for its imperfect dial. Like the “Four-Line” Daytona, the six is upside down in the hours sub-register, making it appear as a nine—yet another design flaw.

Rolex wasn’t always the vertically integrated company we know today. In fact, earlier Daytona’s all utilized movements that were outsourced by other manufacturers. Rolex’s first automatic Daytona was powered by Zenith movements. They were discontinued in 2000 but are admired by collectors, in part because they have the sub-register of running seconds at nine o’clock, a dial design which was seen with original Daytonas.

The release of the “Zenith” Daytona in 1988 increased the size of dials to 40mm, up from 37, and included a lacquered finish. These were the first Daytona’s to receive sapphire crystals and crown guards. They also came in a range of 18K gold cases, becoming a popular choice for dress watches among distinguished men—far from the racing origins of the Daytona Rolex.

If you’ve been looking for the perfect vintage timepiece to invest in, whether it’s a Rolex Daytona or not, head over to our upcoming Important Watches auction, taking place April 30 at 1PM EDT, and check out our offerings today.

Be the first to receive updates on upcoming watch sales, recent acquisitions, and the latest insights on watch collecting from Fortuna’s watch specialists.