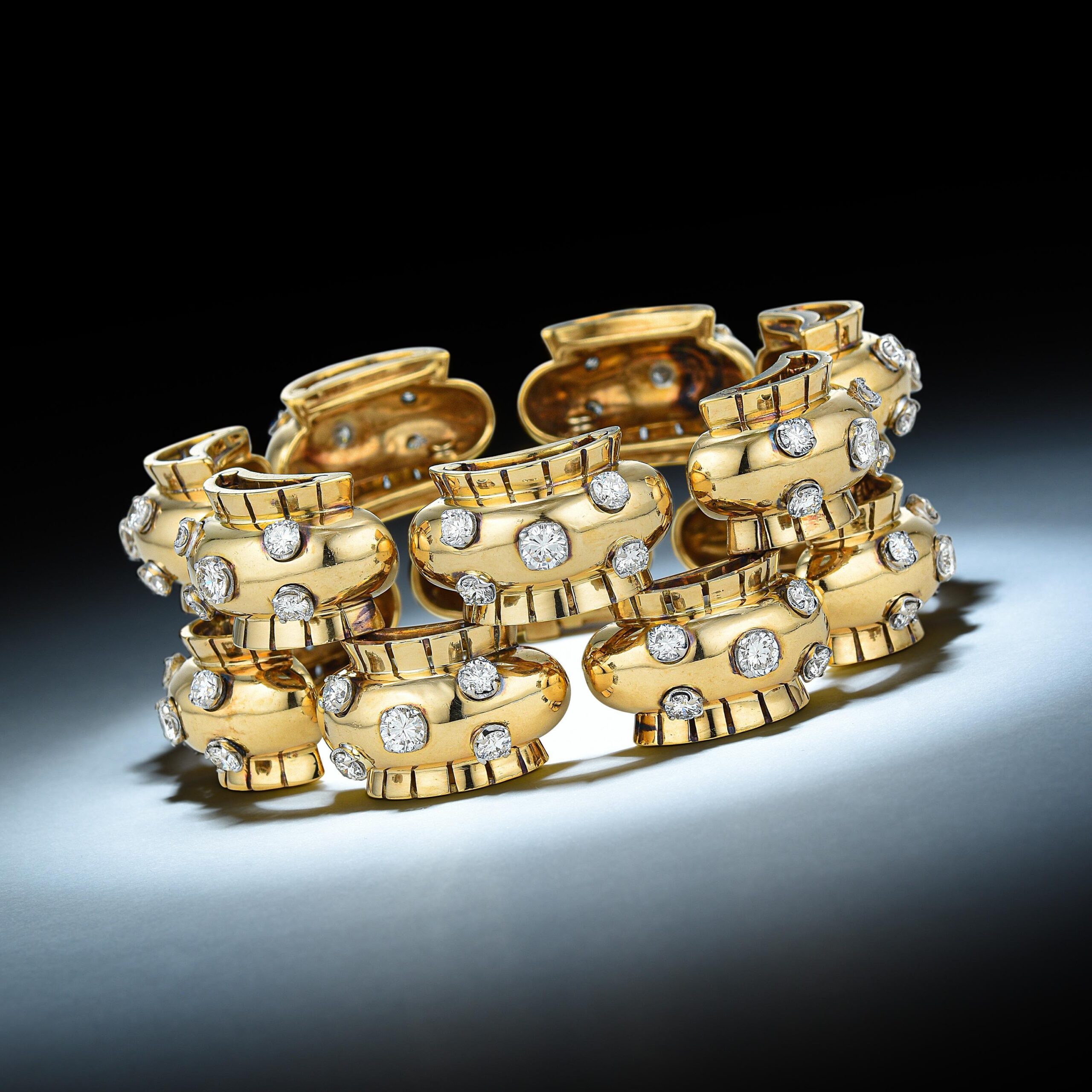 The Era of Retro Jewels

Shaped by sweeping cultural changes and the World Wars era, bold, Retro jewelry embodied the history of its time. Today, this period’s jewelry still offers timeless elegance, value and rich heritage from when the world was swiftly changing.

The Rich History of Retro Jewelry

Retro jewelry spans the period of the late 1930s through the mid-1950s. As it moved through early modernism and World War II, the time’s signature designs reflected the nuanced changes of history.

Its distinctive style began in France, with the first designs by Van Cleef & Arpels appearing at the New York World’s Fair in 1939. Over the next decade, the iconic designs became popular throughout the United States. As World War II ravaged Europe, the United States carried on the European-inspired design. American designs took much inspiration from the new style, adapting past designs to fresh looks with bright colors and dramatic aesthetics.

As the world moved into the 1950s, retro jewelry played a leading role in developing art and design toward modernism, representing the post-World War II era’s futuristic vision. It became a popular image of a new larger-than-life design motif that reflected real-world objects with glamour and excitement.

The World Wars had a profound impact on Retro jewelry. In the midst of the wartime era, patriotic and industrial themes appeared on many retro pieces. Accessories such as tank tread bracelets and red, white and blue stones became increasingly common, as did jewelry with military emblems and motifs.

One of the biggest influences on jewels of the period was the impact of the war on the supply of precious metal and gemstones. Platinum, which had been increasingly popular during the Art Deco era, was rare and often forbidden for sale, and many precious metals had to be rationed for the war effort. Palladium was substituted for platinum and low carat gold alloys, gold mixed heavily with copper, were used to make the most of the gold that was available. The innovative usage of gold alloys was widespread and jewelry of the period often had a reddish tinge to the gold, due to the copper, or incorporated tri-color gold designs. Similarly, precious gems became rarer because of shortages in the supply chain.

Glamorous and dramatic, Retro jewelry reflected new vivacity as the world moved forward from a tumultuous beginning of the century.

Brooches were a popular accessory of this period, added to a scarf, handbag or dress for accentuated elegance. Retro pins were often an elegant touch to soften the hard lines and somber colors of wartime fashion, and designs such as scrolls, fans and jeweled fruit became quite common. The fabric-like and ribbon designs seen in the Retro Sapphire and Ruby Brooch and Retro Tri-color Gold Ruby and Diamond Brooch, pictured below, are quintessentially Retro.

Among the rings of the time, cocktail rings were highly fashionable. Exquisitely complex, they were statement pieces made to draw attention. Typically gold with minimal diamond accents and chunky, brightly colored center-gemstones, they combined brilliant colors and shapes into a bold statement piece.

Necklaces of the era were popularly chokers or collar-length, to accommodate the fashion of dresses with high-necked collars. Gaspipe or Tubogas chains were the familiar chain of the time—their thick weave made them look heavy, but they were lightweight and easy to wear.

An innovation by Van Cleef & Arpels, gold ludo bracelets became all of the rage during the 1930s. These were flexible gold strap bracelets composed of brick-like or hexagonal plaques. The style caught fire and many of the major jewelry houses adopted the design, as seen in the above Cartier Retro Bracelet and Tiffany & Co. Ruby and Diamond Necklace from prior sales.

Another particularly fashionable style of bracelet was to decorate wide gold cuffs by adding recycled pins or charms, particularly from the preceding Art Deco years. Shortages due to the war often meant that clients had to work creatively with their jewelers to remodel or repurpose existing jewels. An excellent example of the trend is this Very Fine Retro Bangle Bracelet with Art Deco Diamond Charms. Oversized woven and braided gold strap bracelets of the time were often also the ideal place to conceal a watch for a touch of functionality.

Many changes toward bolder designs and patterns also reflected the changing times. As the world moved into a new period of history, this jewelry’s futuristic touches represented modernism and innovation in a fast-changing world.

How to Identify Genuine Period Jewelry

There are a few key signifiers that can help you identify Retro jewelry. First, look for the bold color schemes and designs that were a trademark of the period. Another indicator is historical motifs such as military designs that might point you toward the World War II era.

Because many types of metals and gemstones were scarce during the time, pay attention to the jewelry piece’s metals. Finally, look for clip-on earrings, brooch clasps, and similar designs that match the styles of this period.

Relive the Elegance of Retro Jewelry From Our Collections

At FORTUNA®, we value transparency and help each of our clients understand their jewelry’s true value. We are pleased to offer an elegant selection of genuine retro jewelry pieces. To explore our exquisite collections, browse our upcoming auctions today.