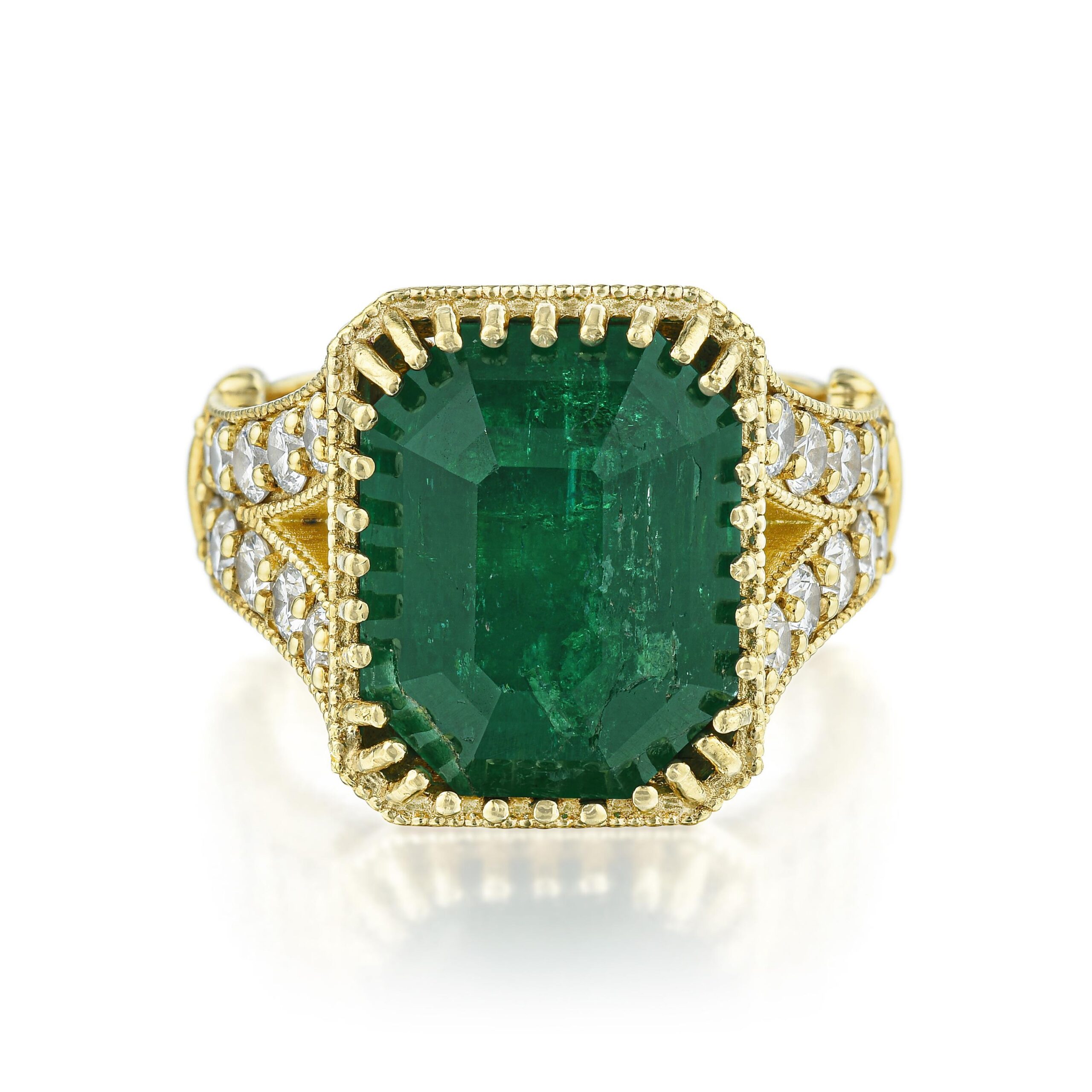 Rare Muzo Emerald from a Spanish Shipwreck Comes to Auction

Imagine seeing hundreds of sparkling green emeralds floating down through the water toward you like raindrops. That is how one former graduate archaeology student, Cris Gober, described his work uncovering ancient treasure. The emeralds were part of the precious cargo from a sunken shipwreck, and they were being sucked up from the seabed by an airlift. The emeralds had spent over 300 years at the bottom of the ocean. FORTUNA® is proud to have had one such rare 9.47-Carat Fine Colombian Muzo Emerald from the Nuestra Señora de Atocha and Diamond Ring in the recent May Jewels and Watches auction.

In March of 1622, the Nuestra Señora de Atocha left Spain on a four-month journey across the Atlantic to Cartagena, Colombia. It was there that the sizable Spanish galleon retrieved over 71 pounds of emeralds from its South American colonies. They would take their bounty to Panama City, Florida, where it took two months just to record the vast treasures they had amounted. From Florida, they proceeded onto Havana, to join the rest of the 28-ship Spanish fleet, Tierra Firme (Firm Land) and load the most valuable of their cargo onto the Nuestra Señora de Atocha, which was the largest and most heavily armed ship of them all. The Atocha would trail the rest of the convoy in case of an attack from behind. An attack came, but not from pirates or British naval ships; the Atocha was leaving Havana in the peak of hurricane season and succumbed to nature’s fury. Just four days after departing Cuba, the Atocha sunk—taking with it over 260 lives. The few survivors of the wreckage and the surviving Spanish ships marked the spot where the ship sank, but more hurricanes ruined any attempts to salvage the treasure.

The Atocha alone carried cargo whose estimates range between $250 and $500 million, including silver from Peru and Mexico, gold and emeralds from Colombia, pearls from Venezuela, as well as more common goods including worked silverware, tobacco, and bronze cannons. Muzo emeralds are coveted worldwide for their exceptional quality and richness in color. They are named after a town in the Colombian Andes, known as the emerald capital of the world. In fact, the main economy of Muzo remains to this day, 75% emerald mining.

So how did this 9.47-Carat Fine Colombian Muzo Emerald from the Nuestra Señora de Atocha end up in FORTUNA®’s May Jewels & Watches auction? Over 300 years after the shipwreck, an unlikely hero would discover the treasure. Mel Fisher, a former chicken farmer turned diving shop owner, spent 16 years searching for the famed treasure. While Mel found many clues scattered across the Florida coast, such as copper cannons that were inscribed as belonging to the Atocha, the actual shipwreck continued to elude Mel and his team of divers.

Mel continued to search for the ship with his children, and world-record-setting diver, his wife, Dolores. On July 20, 1985, his son Kane, radioed into his father to let him know, they had finally “found the motherlode.” They had found the bow of the ship, and with it, over $400 million in goods. After diving for minimum wage for 16 years, this would change the Fisher’s lives forever—if they got to keep it.

The state of Florida attempted to claim the treasure as theirs, but the Supreme Court of Florida ruled in favor of Fisher and his team. The case could easily have gone another way; only a few years later, a judge ruled the finders of another Spanish shipwreck had to return the treasure to Spain.

The images of Mel smiling with glee rocked the media. Not to mention the images of Jimmy Buffet, singer and Florida Keys local, singing while perched on bars of silver recovered from the ship. Mel went on to become a Florida hero and a pop-culture icon, even appearing on “Late Night with Johnny Carson,” wearing some of his favorite artifacts. Much of the cache of treasure, however, went on permanent display at the Mel Fisher Maritime Museum in Key West, Florida, which to this day celebrates Mel’s adventures and heroism.

The story of the Nuestra Señora de Atocha isn’t over, however. Experts believe the majority of the ship’s emeralds and other important treasures, would have been kept in the stern of the ship, which remains unfound. Yet Mel Fisher’s discovery was still added to 2014’s Guinness Book of World Records as the most valuable shipwreck to be recovered, despite it being incomplete.

While Colombian emeralds are already prized for their exceptional color and quality, Colombian emeralds verified to originate from the historic Muzo mines are even more desirable within the colored gemstone market. This particular Muzo emerald offered in FORTUNA’s recent May auction is especially significant given its riveting origins. It achieved a final price of $40,625, flying past the starting bid of $9,500. For more details on this historic piece, click here.

FORTUNA®’s May Jewels & Watches auction took place on Thursday, May 13th at 11 AM EDT. For full sale results, click here.