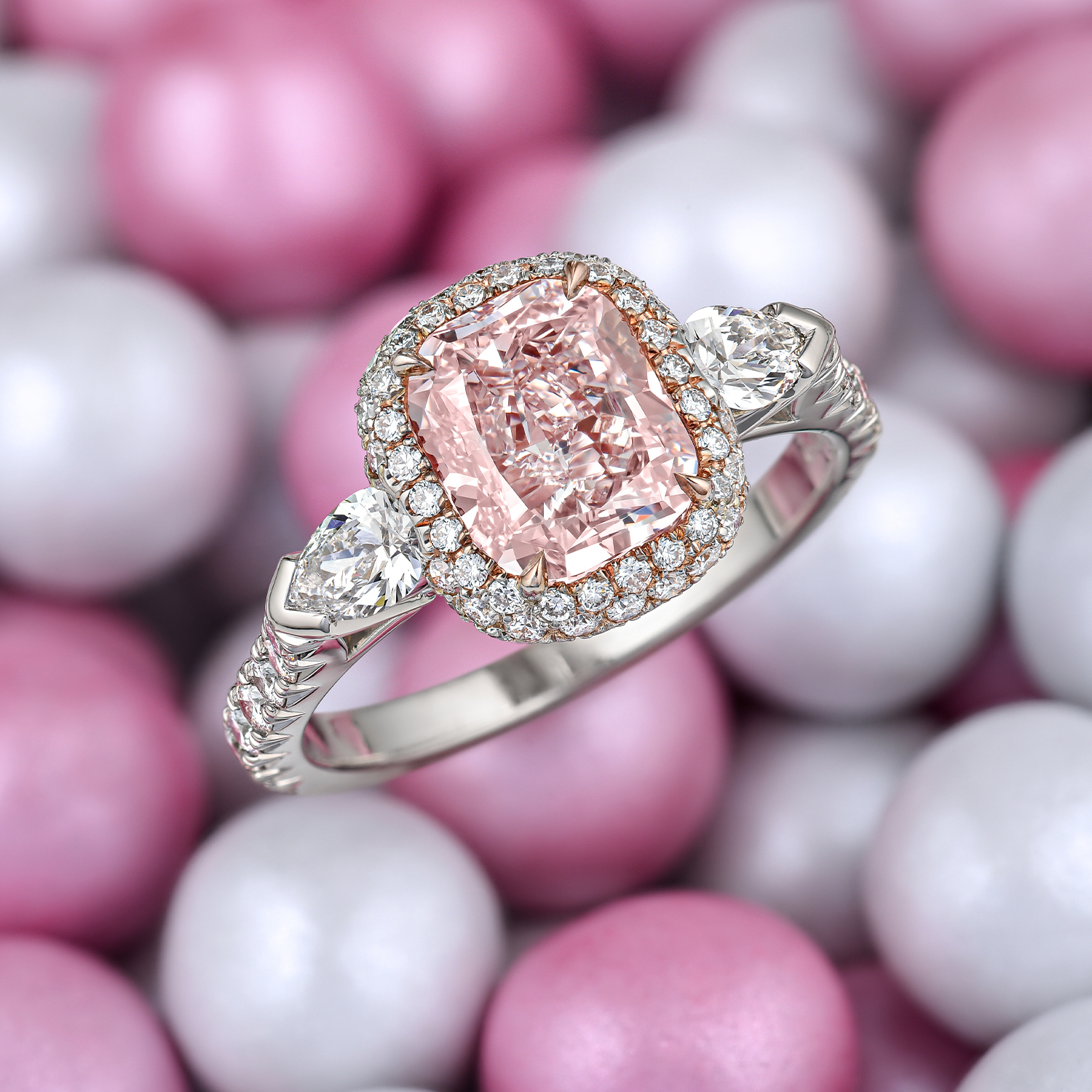 Pink diamonds are among the rarest fancy color diamonds. Even the famed Argyle mine in Australia, known for producing over 80% of the world’s pink diamonds, finds them only amongst less than 1% of its stock. The value of diamonds like these is expected to skyrocket after the closure of this mine in 2020. In fact, according to the Fancy Color Research Foundation (FCRF), the value of pink diamonds already rose 116 percent between 2010 and 2020. This rise is greater than that of any other diamond, including the extremely rare blue diamond—making pink diamonds a great investment, as well as a wonderful engagement ring.

Now that the Argyle mine has shut, where else can high-quality pink diamonds be sourced? The stones can also be found in Russia, Tanzania, South Africa, and occasionally Brazil. Yet, there is no reported regular production from any mine. Pink diamonds are also graded for the intensity of the color, which follows an internationally recognized scale of: faint, very light, light, fancy light, fancy, fancy intense, fancy deep, and fancy vivid. And like other diamonds, the stronger the color, the higher the price tag. The price per carat of a natural fancy pink diamond can range anywhere between $100,000 per carat to over $1,000,000 per carat.

“I believe in pink.”

Pink diamonds aren’t only special because of their rarity. Part of the allure of pink diamonds is their mystery. To this day, gemologists aren’t entirely sure how the pink diamond obtains its color. Unlike other Fancy Color Diamonds, the pink shade is not caused from chemical impurities that cause some diamonds to appear blue or yellow. Some suspect that the enormous pressure undergone by pink diamonds during formation is a likely cause, though others believe it could be related to a seismic shock that impacted the stone’s molecular structure. As a result, the color and hue of lab-grown pink diamonds cannot be replicated to appear even close to that of a true natural pink diamond.

Pink diamonds became the talk of the town and rose in demand after the engagement of Jennifer Lopez and Ben Affleck in 2002. The star popped the question with an eye-popping fancy pink diamond ring by Harry Winston. The recent rekindling of romance between the two stars has sparked much speculation over whether the return of “Bennifer” would also mean the return of her pink diamond ring. The pink diamond engagement ring craze even spread to other celebrity couples, such as Blake Lively and Ryan Reynolds, Victoria and David Beckham, and Margot Robbie and Tom Ackerley.

Throughout the eighteenth century, pink was the most fashionable color for both gentlemen and ladies. By the nineteenth century, color was feminized, as Euro-American men adopted black suits. In the 1940’s, pink began to be used to as a gender signifier in babies, a result of clever marketing to sell more baby clothes. Since then, pink has seen huge transformations. From its association with Barbie and femininity, it has now become a powerful, at times, even “punk” color—or so says Dr. Valerie Steele, director of the Fashion Institute of Technology in New York.

“Pink is the only true rock and roll color.”

While the origin of a pink diamond’s color is still heavily debated by geologists, the color pink has captured people for centuries, inspiring such devotion and iconic phrases as “la vie en rose” and “I believe in pink.” In popular culture, pink has been used to depict an array of moods, from the fun-loving attitude of Elle Woods in “Legally Blonde” to Elvis Presley’s cool pink Cadillac. In Audrey Hepburn’s film, “Funny Face,” women were encouraged to do away with the dull beige and black of everyday life and “Think Pink!”. The color is truly electric and appropriate for all occasions. So whether your style is more “Pretty in Pink” or “Punk Pink,” a pink diamond engagement ring is sure to inspire equal feelings of love, romance, and fortitude in all who wear it.