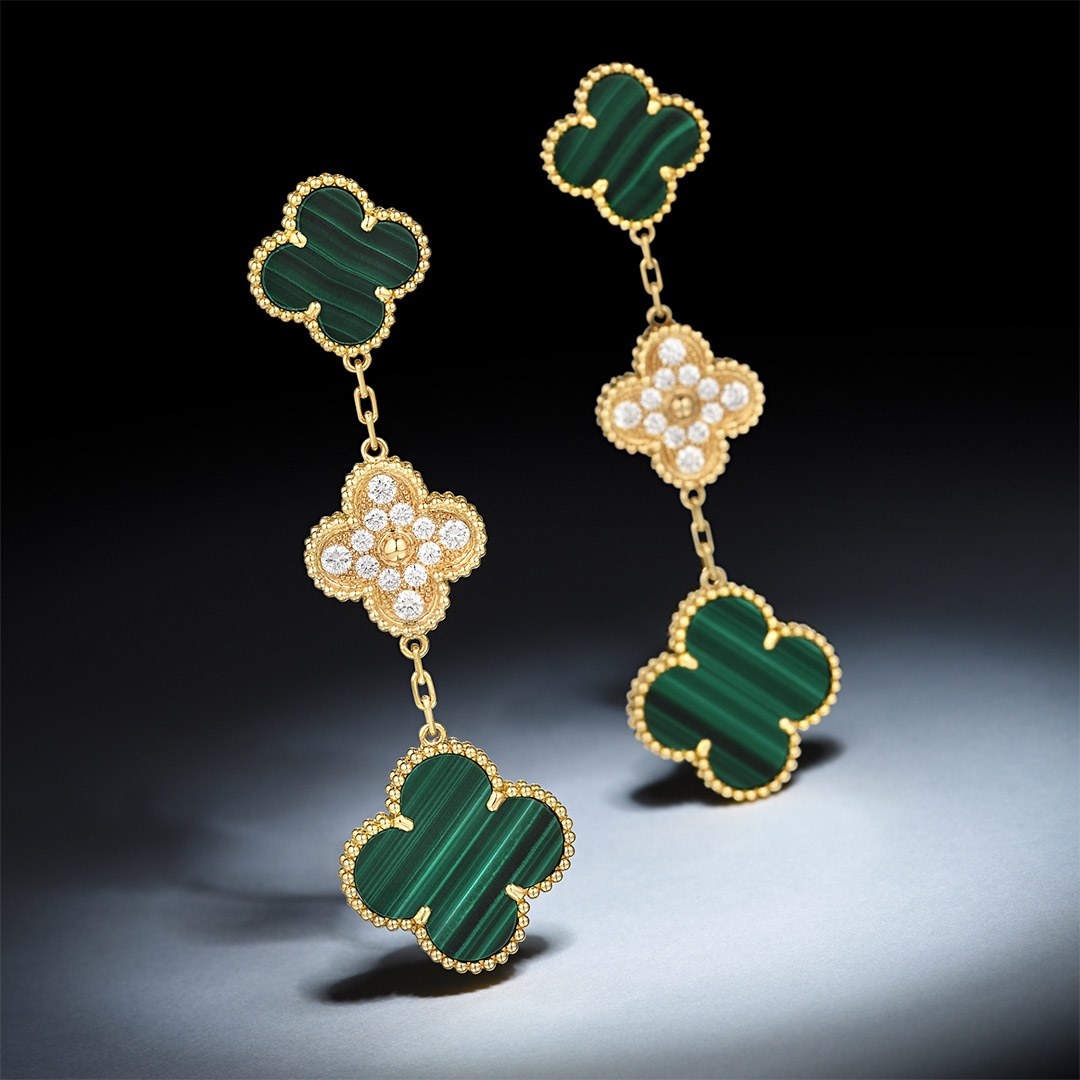 The Origins of the Van Cleef & Arpels Alhambra Collection

Van Cleef & Arpels’s opened the Parisian “La Boutique,” in 1954, which was meant to offer more accessible fine jewelry for young women to wear. This burgeoned the creativity that would eventually lead to the creation of the jewelry house’s most iconic collection, the Alhambra, in 1968. The craftsmen at VCA could not have anticipated the sweeping change that this new line would bring from 1968 and onward.

That year saw the introduction of the VCA Alhambra design, with a shape reminiscent of a four-leaf clover crafted from beaded edges. A long necklace adorned with 20 motifs debuted the collection, the origin of an emblematic style for the jeweler that since proliferated and endures today.

What Is the Van Cleef & Arpels Alhambra Design?

The Alhambra collection likely received its namesake from the palace and fortress in Granada, Spain, whose sweeping ornate archways are said to have been the inspiration. 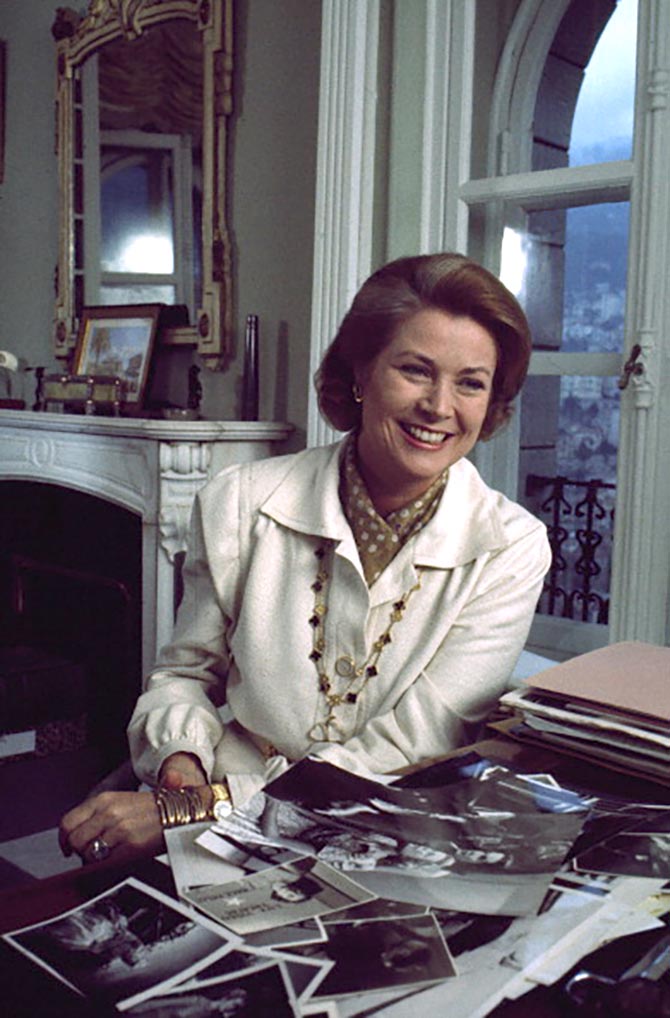 The design resembles the four overlapping circles of Moorish quatrefoil decorations—traditional signs of good luck— so the symbol had small appearances in jewelry during the 1920s as a talisman.

“To be lucky you have to believe in luck.”

—Jacques Arpels, who was fond of including symbols of luck in many of his designs.

The Alhambra motif could also be described as a four-leaf clover, which the artisan collected in his garden in Germigny-l’Évêque just northeast of Paris.

The collection became a celebrity favorite throughout the 1970s. Former Hollywood star and Princess of Monaco, Grace Kelly was particularly fond of the iconic design, oftentimes wearing more than one strand of Alhambra necklaces at once.

The Alhambra motif has been revived every decade since its induction, utilizing new gemstones, such as chalcedony, carnelian, tiger’s eye and diamond, building upon the design’s versatility. Royalty and celebrities alike remain partial to the designs; the Duchess of Cambridge wore them just a few weeks ago at the BAFTA awards, and Reese Witherspoon can be spotted wearing them casually while out walking through Los Angeles. The versatility of the piece is a testament to the skill of the artisans and their incredible eye for design.

Some of the most prized VCA Alhambra pieces include the opera-length necklaces in the Vintage Alhambra collection, a reproduction of the design’s first editions. The Magic Alhambra collection uses a bold, asymmetrical design for the modern-day.  Chains of white, yellow or rose gold set with up to 20 diamond motifs are the most expensive pieces in these collections.

The turquoise Alhambra set, first introduced in the ’60s has been notoriously difficult to find as turquoise that meets the jewelry maison’s quality standard is hard to come by.

Are There Still Pieces Being Made?

The most recent releases featuring the Alhambra included four models of long necklaces and bracelets introduced at the collection’s 50th-anniversary celebration in 2018. Their design also follows the original, this time set with diamonds or rock crystals with grey mother-of-pearl, lapis lazuli or onyx. 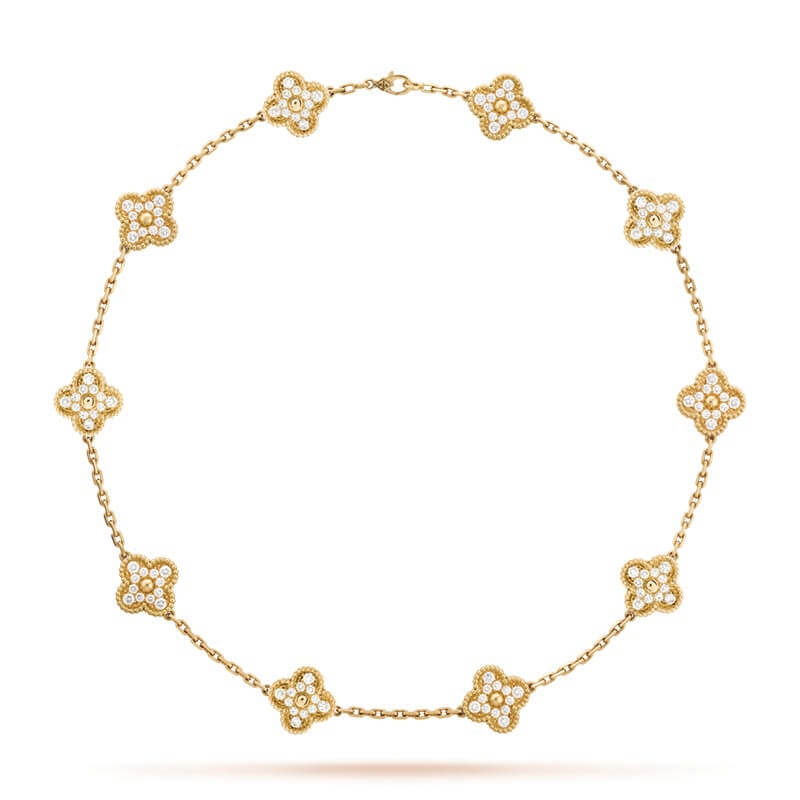 Today, wearers of VCA jewelry have a variety of materials, sizes and gems to choose from. The many iterations of the Alhambra make more personal expressions possible. Some of VCA’s most recent takes on the motif were revived in collections like Magic Alhambra, Sweet Alhambra, Pure Alhambra, Lucky Alhambra and Byzantine Alhambra, to name a few. FORTUNA recently sold a piece from the Magic Alhambra collection, a chic pair of Malachite and Diamond Earrings with 3 Motifs (pictured above), for $11,250 at our October ’19 Exchange sale.

The high-end jewelry maison never expected their fine jewelry line to withstand the test of time but the collection remains one of their most coveted and recognizable designs. The Alhambra design changed significantly throughout the legacy of Van Cleef & Arpels. However, the enduring, iconic nature and popularity of these pieces may mean that later generations could be lucky enough to acquire new editions for themselves. Find Stunning Van Cleef & Arpels Jewelry at FORTUNA. 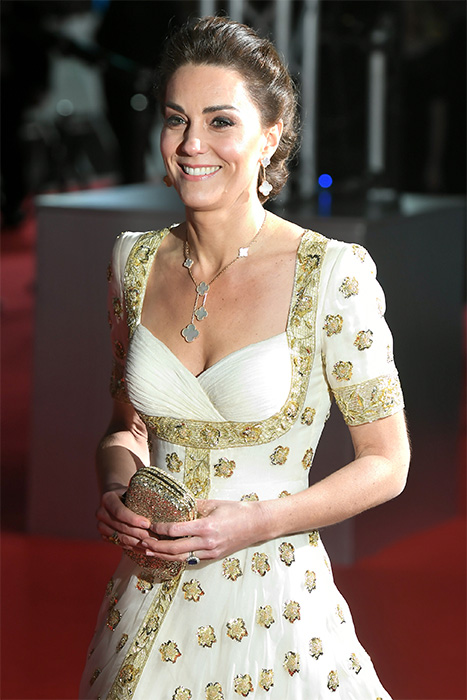 If you’re pursuing pieces of fine jewelry from the designers of VCA, a sale by FORTUNA may have just the piece you’re looking for. Browse past VCA Alhambra pieces sold by FORTUNA here.

We also provide unbiased appraisals and handle all of the consignment for your VCA rings, necklaces and other accessories. Like you, Fortuna is passionate about the craftsmanship and value of fine jewelry, and we strive to provide the most transparent, risk-free experience in selling or buying your next piece.