The term Art Nouveau was officially born in 1896 when art dealer Samuel Bing renamed his Asian art gallery “La Maison de l’Art Nouveau.” Bringing together a group of artists and designers engaged in a fresh new visual expression, the Parisian art gallery unknowingly gave the name to the movement that would celebrate a renewal of European aesthetics. After the Paris World Fair of 1900, the Art Nouveau style gained such popularity that for a brief moment it was the height of mainstream fashion. 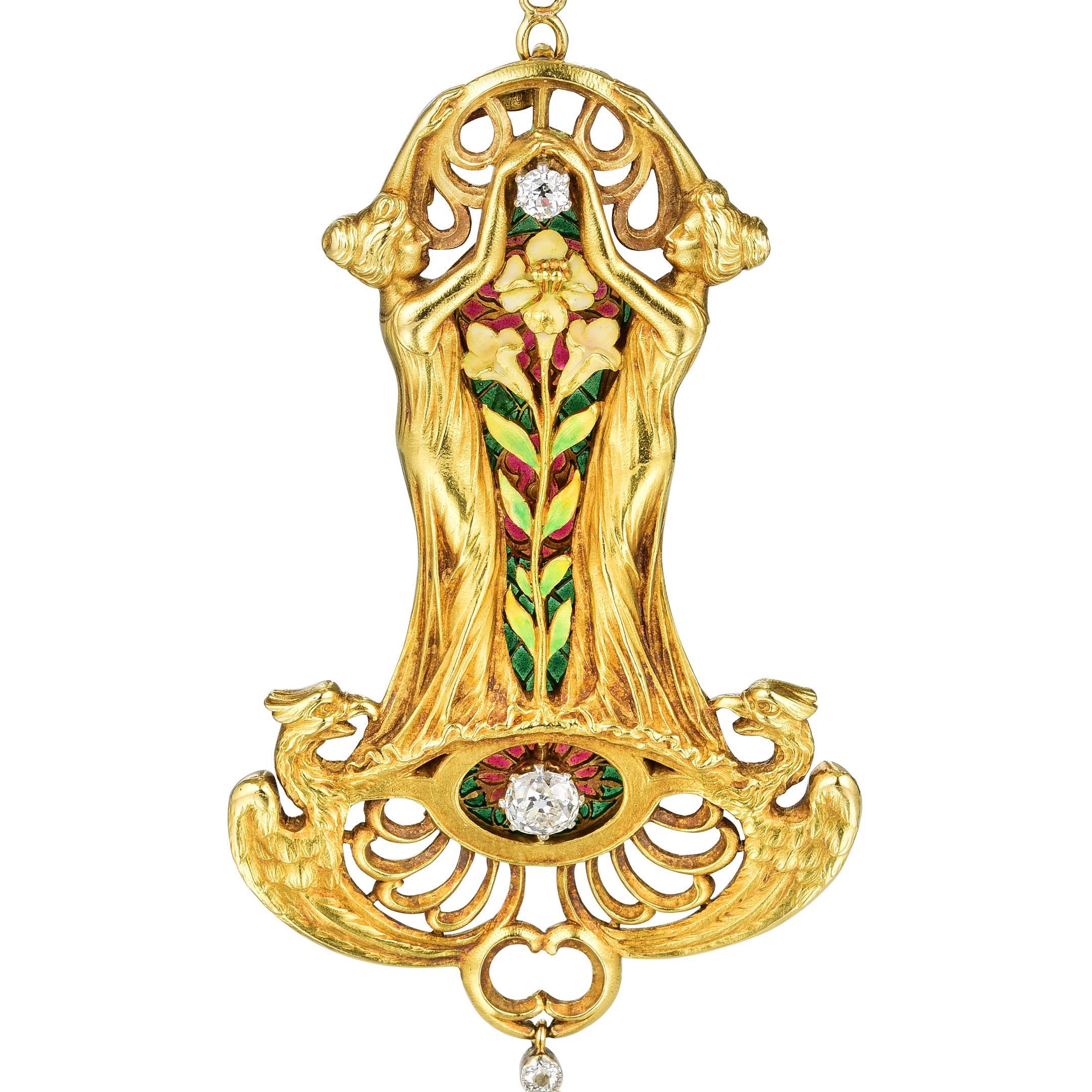 The Art Nouveau jewelry style is romantic, feminine and magical. Many pieces of Art Nouveau jewelry are truly works of art, not merely items of adornment showcasing precious stones. The emphasis on the setting, the delicate sensitivity to color, shading and light, as well the use of sensuous lines and contours, and the use of mystical creatures defined the style.

Diamonds were used sparingly, while moonstone, amethyst, opal, amber, citrine, peridot, and freshwater pearls became popular materials used in the pursuit of creative brilliance. Jewelers developed and experimented with various new enameling techniques as well, most importantly plique-à-jour, a technique that produces thin layers of enamel that have the appearance of stained glass. This unique, three-dimensional technique was very challenging and was a testament to the jeweler’s skill and artistry

Art Nouveau designs were innovative and intensely creative. Jewelers gained their inspiration from many sources, the foremost influence being the use of nature in Japanese art. Among artist’ favorite motifs were flowers, butterflies and dragonflies, whose delicate petals and wings could be closely mimicked with enamel and a subtle shimmering provided using mixed metals and iridescences of moonstones and opals. The female body and its features were also favored as the perfect display of sinuous lines and delicate turns, to create the impression of flowing movement. 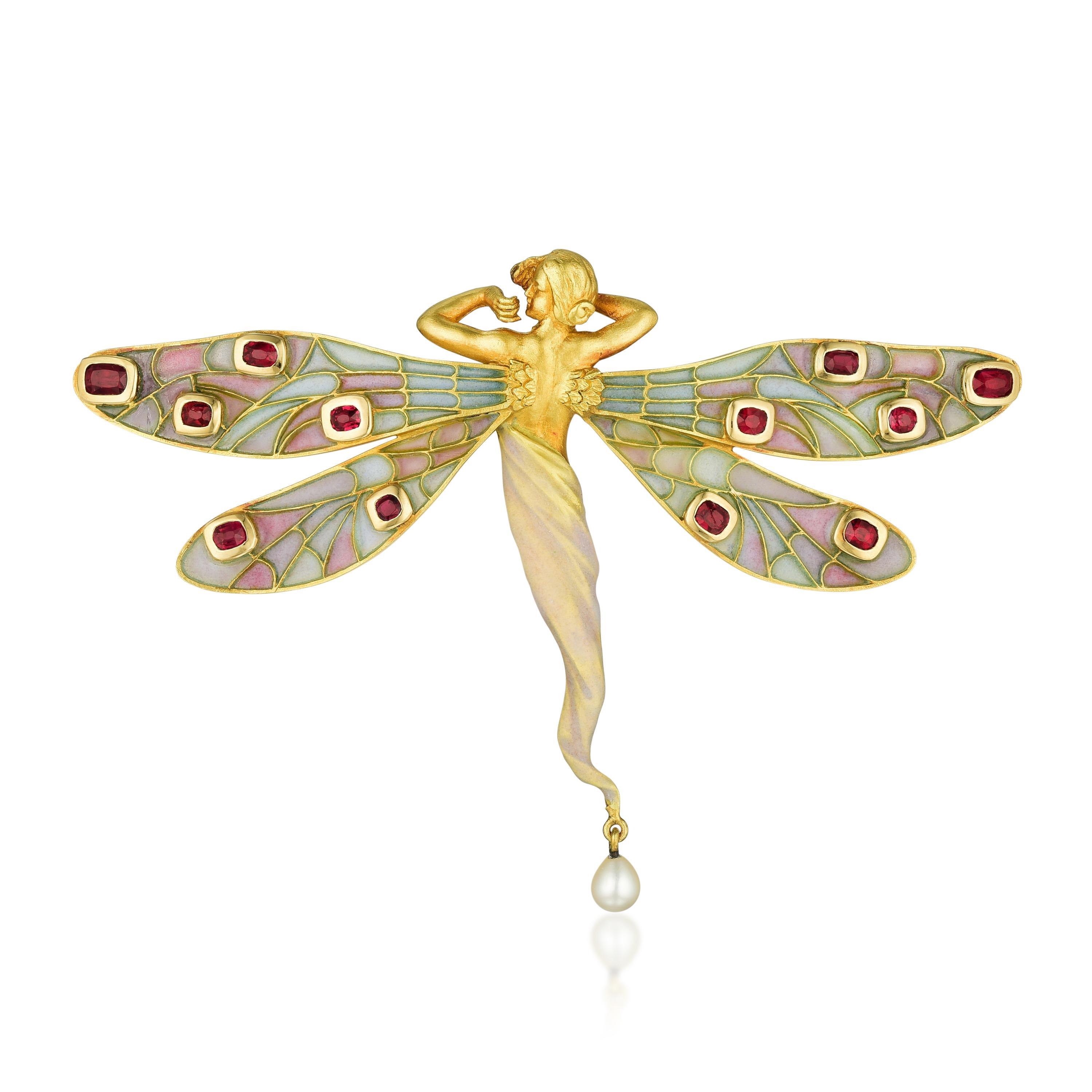 Rene Lalique, the most celebrated art nouveau designer, championed jewelry that was not used as a vehicle for the display of wealth, “but as an opportunity for creating an object of art no less serious than a painting or sculpture.”1 Born in 1860 and trained as a glass designer, the French artist is known for his creation of vases, chandeliers, perfume bottles, and of course, jewelry. After having worked for Cartier and Boucheron amongst other French jewelry houses, Lalique opened his own business, designing glass objects and jewelry inspired by antiquity and Japonisme. Lalique’s work was made popular among the high society by actress Sarah Bernhardt. In fact, his pieces were regarded as so bold and modern – some depicting naked women – that they were only worn by wealthy, “artistic types.”

For our December Magnificent Jewels sale, FORTUNA presented a variety of examples of the Art Nouveau style of jewelry, as shown in the video above. They are imaginative pieces, daring and different from other styles and forms. Showcasing Lalique’s preference for more original and fragile materials, a glass and thread necklace displays a delicate and impossibly subtle carving of two women in a pictorial scene, reminiscent of medieval iconography. 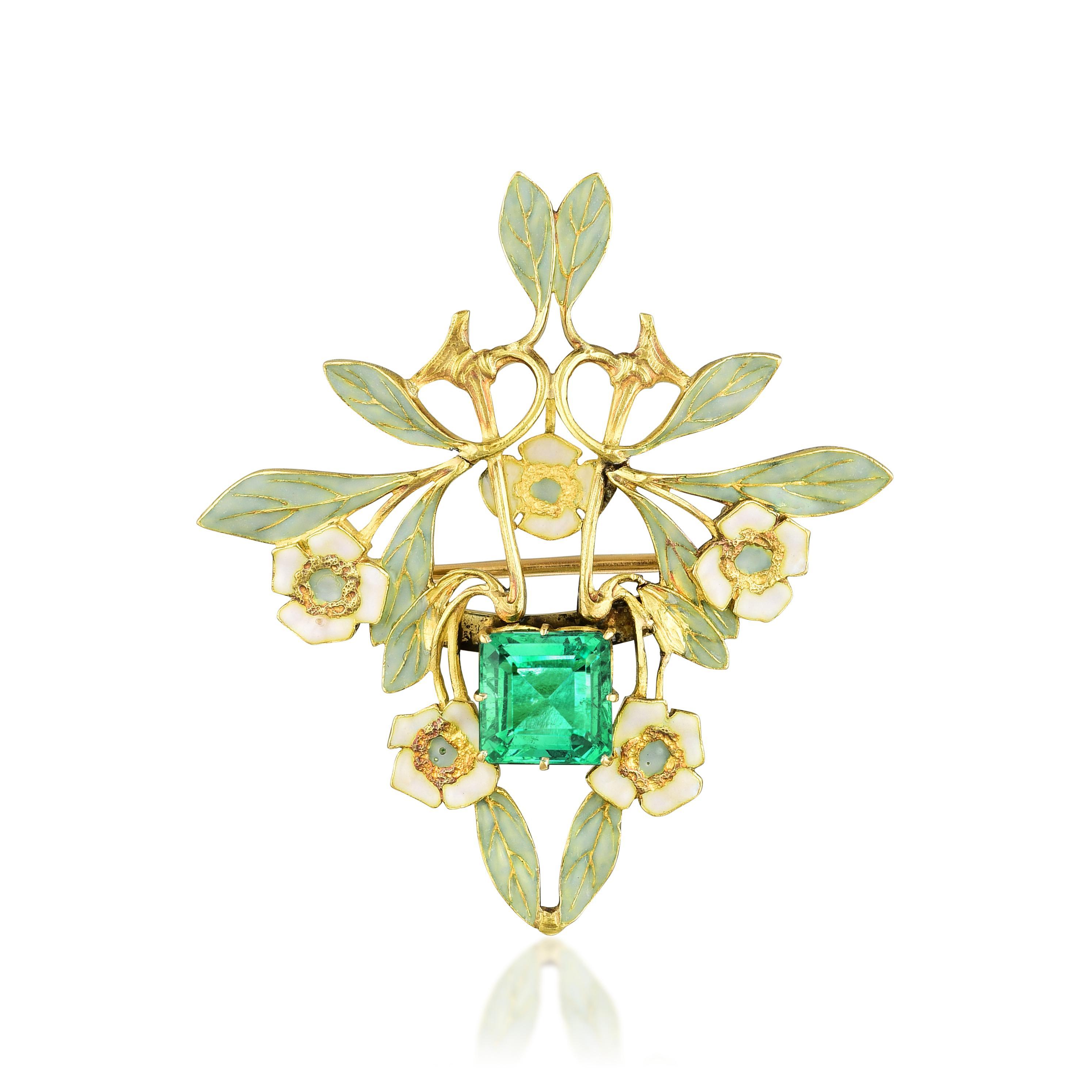 A striking diamond, pearl and enamel pendant demonstrates how plique-a-jour enamel is used as naturalistic shading and to enhance volume and fullness in the piece. Like many art nouveau pieces, the back of the pendant proves as much attention to detail as the front. Much to the viewer’s satisfaction, the pendant can be turned to reveal the female figures’ alternate side, adding an unexpected point of interest.

The effectiveness and versatility of the enameling technique developed during this era, are also demonstrated in both the dragonfly and the feather pins, two more wearable examples because of their petite scale. A playful citrine and green tourmaline necklace illustrates perfectly how even abstract Art Nouveau pieces would be brought to life through the use of color and sinuous curves.

Taking the time to observe these pieces, there can be no doubt as to the importance of the Art Nouveau period in ushering in 20th-century design and with it, a multiplicity of new techniques and creative achievements. It is through the Art Nouveau style that the jeweler breaks from the traditional confinements of adornment, to find a true form of artistic expression.